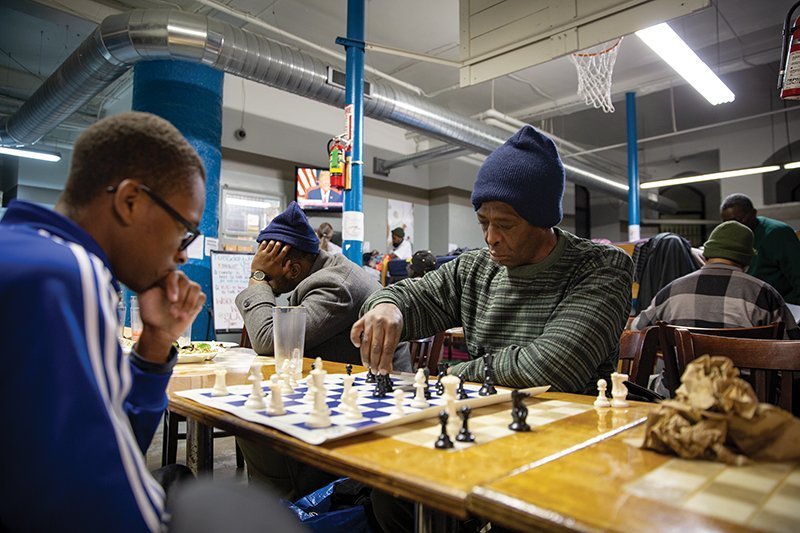 Xavier Jallow, a freshman at St. Louis University High School, sits in the chaotic warmth of Peter & Paul Community Services’ emergency shelter, ignoring shouts and clattering trays, eyes fixed on his opponent. Jallow and one of this evening’s residents, Jerrod “B.B.” Booth, are engaged in a silent fast-pitched battle. They reach to slide and capture, knights and bishops knocking heads as they’re swooped off the board. A small crowd gathers, drawn by the power of the men’s concentration.

Finally the game reaches a point of no return. “He’s in a bad position—bad position,” Booth explains, “and his queen can’t even help him.” Still, they play it out, the moves stretching apart as the men give each other room to think.

Ed Rataj, a retired law partner from Bryan Cave, watches fondly from the sidelines. Nicknamed “Chess Man,” he started this program, and he’s at Peter and Paul or Biddle Housing Opportunities Center four nights a week.

“You’re never sure who’s going to be there,” he says. “Sometimes I’ll go in, set up the boards…nobody. But by the time we leave, two or three guys are lined up to play next.”

Rataj (pronounced with the “j” silent) played chess as a kid but only got serious when he volunteered for city schools that wanted programs. Delighted, he boned up on strategy. Soon after, he was at Peter and Paul, dropping off a packet of bonds used to recruit Union soldiers in the Civil War (“I donate weird stuff to charity auctions”) and mentioned that he was on his way to teach a chess class. A staffer looked up: “Did you say chess?” They’d had some interest, especially from one guest. Maybe he could start a program?

“I thought I was going to be teaching people to play,” Rataj says, laughing. “I never beat Eduardo. Never once. He’d move his piece then get up and do a dance”—he demonstrates, feet kicking high and arms windmilling—“and the whole time, he was obliterating me on the chessboard.”

When Rataj tried to recruit more players from his parish, Immacolata, they protested, saying, “All I know is how the pieces move.” He nodded briskly: “Perfect. We’re trying to build up the homeless guys’ self-esteem and your humility.” 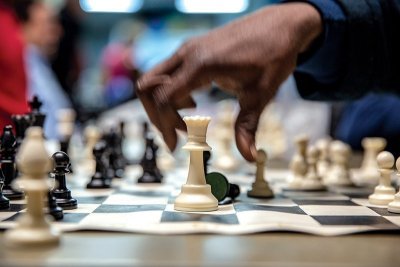 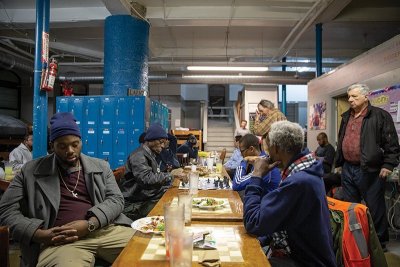 These days, better players are volunteering—because they find worthy opponents. Corey Reinig, an actuary for Anthem, joined the world-class St. Louis Chess Club but also plays regularly at the shelter. Samuel Roth, a grad student in business at Washington University, “was kind of interested to play at a less formal place. You get some really creative, aggressive players here.”

Rataj agrees, but he’s noticed that many “have terrible openings. I’ll say, ‘People have been working on this for 1,000 years. Here’s the London opening. Here’s the Colle Zukertort. Instead of you opening in a way that’s weak and gives me all sorts of advantages you’re going to have to overcome…’” He sighs. “Often they want to play it their way.”

Eddie Morris regrets that stubbornness—in life as well as chess: “When I was young, I made some very, very foolish moves.” We talk at the Biddle shelter one sharply cold evening; cots are being brought in to increase capacity, so we have to wait to set up the chess boards. Of grandfatherly age, Morris is wearing a Mizzou Tigers hoodie and carefully coughing into his elbow; there’s a hoarse rustle in his deep, calm voice. “I learned the fundamental moves when I was in the penitentiary,” he says. “The strategy you have to develop on your own, but my downfall is, I never read the chess book.”

That hasn’t stopped him from wiping the board with volunteers, though. Above high cheekbones, his eyes curve into a merry squint, like Santa’s. Chess, to him, is “a mind game. You can apply it to life situations, figure out what moves you’re gonna make. If a person gets angry with you, are you gonna come at them strong, push forward real fast, or hold back and speak to them in a calm and gentle manner?” He gropes for a word, pulls out his phone. “OK Google, what is the word when you rush into something without thinking about the consequences?” He peers at the screen. “Impulsive.”

Roth, whose life has been softer and more stable, wants chess to teach him to “stay aggressive, stay hungry. I’ll start losing more often when I’m starting to be defensive, and I have to remind myself to, when I’m threatened, punch back harder. Don’t go into a shell.” He starts a game, a black and a white piece concealed in his closed fists. His opponent chooses black, which gives Roth an instant advantage. White always opens.

A skinny guy approaches Rich Esswein (chess coach for SLUH) with his hands up in front of his chest, as though to ward off embarrassment: “It’s been a while since I played.” Esswein goes into teaching mode: “The pointy-headed guy is the bishop…” Slowly the guy relaxes into the game.

Relationships form here. Players aren’t swapping stories or asking about one another’s families, but “you get a sense of who your opponent is,” Rataj says. “He becomes a person to you.”

I ask Rataj for his most moving experience, expecting a poignant redemption story of some sort. “I beat Ken!” he exults. “He did not see the checkmate coming. I have lost so many games to Ken!”

Across a chessboard, people play as equals, and everything else drops away.

After Thieves Stole Guitar Man’s Guitar, His Fans Stepped Up in a Big...

‘Put the pieces back together’; St. Louis homeless clean the streets...
Scroll to top
Cart
Checkout - $0.00